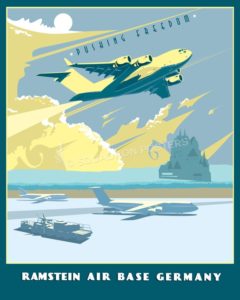 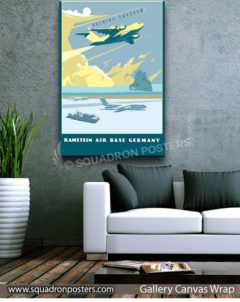 Ramstein Air Base is a United States Air Force base in Rhineland-Palatinate, a state in southwestern Germany. It serves as headquarters for the United States Air Forces in Europe – Air Forces Africa (USAFE-AFAFRICA) and also for NATO Allied Air Command (AIRCOM).  The east gate of Ramstein Air Base is about 16 kilometres (9.9 mi) from Kaiserslautern (locally referred to by Americans as “K-Town”). Other nearby civilian communities include Ramstein-Miesenbach, just outside the base’s west gate, and Landstuhl, about 3 miles (4.8 km) from the west gate.

The C-17 Globemaster III is a large military transport aircraft. It was developed for the United States Air Force from the 1980s to the early 1990s by McDonnell Douglas. The C-17 commonly performs tactical and strategic airlift missions, transporting troops and cargo throughout the world; additional roles include medical evacuation and airdrop duties. (Boeing merged with McDonnell Douglas in 1997)