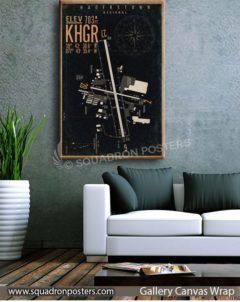 Hagerstown Regional Airport (IATA: HGR, ICAO: KHGR, FAA LID: HGR), also known as Richard A. Henson Field, is a county-owned public-use airport in Washington County, Maryland, United States. It is located four nautical miles (5 mi, 7 km) north of the central business district of Hagerstown, Maryland, about a half mile (800 m) from the Maryland/Pennsylvania border. The airport is in Western Maryland off Interstate 81 at exit 10 and U.S. Route 11, not far from Northern Virginia, South Central Pennsylvania, and the Eastern Panhandle of West Virginia. The airfield opened in 1928 on 60 acres of farmland purchased by the Kreider-Reisner Aircraft Company. It was purchased by the City of Hagerstown in 1933. The facility was named Washington County Regional Airport in 1981, when ownership was transferred from the City of Hagerstown to Washington County. In 1998, the county renamed it Hagerstown Regional Airport – Richard A. Henson Field.