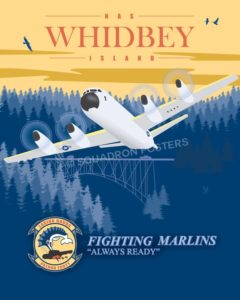 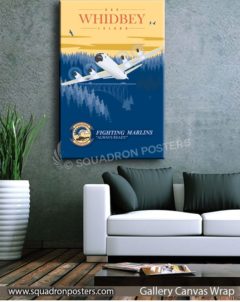 This “NAS Whidbey Island VP-40 P-3” vintage style poster art featuring Patrol Squadron 40 (VP-40), also known as the “Fighting Marlins”, is a maritime patrol squadron of the United States Navy based at Naval Air Station Whidbey Island, Washington. Naval Air Station Whidbey Island is a naval air station located in two sections near Oak Harbor, on Whidbey Island, in Island County, Washington. It was commissioned as an active U.S. Navy installation on 21 September 1942. The main portion of the base is called Ault Field in memory of Commander William B. Ault, who was listed ‘missing in action’ during the Battle of the Coral Sea (1942). Ault Field is located approximately three miles north of Oak Harbor. The other section of the air station is known as the Seaplane Base. Originally home to PBY Catalina flying boats. The P-3 Orion is a four-engine turboprop anti-submarine and maritime surveillance aircraft developed for the United States Navy and introduced in the 1960s. Lockheed based it on the L-188 Electra commercial airliner. The aircraft is easily recognizable from the Electra by its distinctive tail stinger or “MAD Boom”, used for the magnetic detection of submarines.