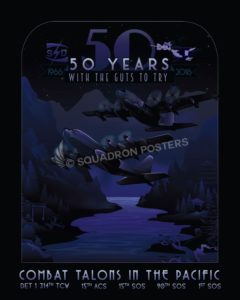 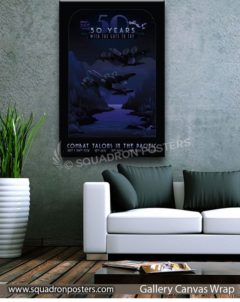 In 1966, six aircrews and four MC-130E Combat Talon aircraft deployed from Pope Air Force Base, North Carolina to CCK Air Base, Taiwan, to support operations in Vietnam. This began the Combat Talon’s mission in the Pacific AOR.  Now in 2016, the 1st Special Operations Squadron continues that mission operating the MC-130H Combat Talon II aircraft.  Since 1966 Combat Talons have had a constant presence in the Pacific.  This heritage poster celebrates the rich 50 year history, even though the squadron designation has changed, the mission has remained the same, to provide specialized air mobility support to special operations forces in the Pacific. Anytime, Anyplace. “With the Guts to Try”.

The MC-130E was the first Combat Talon and was developed to support clandestine special operations missions during the Vietnam War. Eighteen were created by modifying C-130E transports, and four lost through attrition, but the remainder served more than four decades after their initial modification.