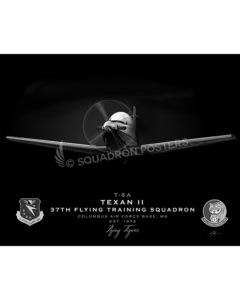 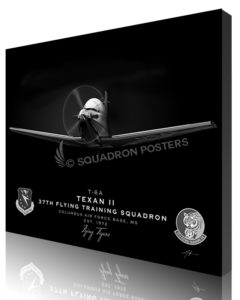 The 37th Flying Training Squadron (37th FTS) is part of the 14th Flying Training Wing based at Columbus Air Force Base, Mississippi. It operates T-6 Texan II aircraft conducting flight training. The squadron was first established as the 37th Pursuit Squadron and activated in January 1941. As the 37th Fighter Squadron it saw combat during World War II in the Mediterranean and European Theaters, and was awarded a Distinguished Unit Citation for action over Austria in 1944. It was inactivated after war’s end in 1945.

The squadron was active with Air Defense Command in the northeastern United States from 1946 to 1949. Originally equipped with propeller fighters, it became one of the first units equipped with the Republic F-84 Thunderjet. As the 37th Fighter-Interceptor Squadron’, the unit once again was assigned the mission of defending the northeastern United States from 1952 to 1960. The squadron has conducted flying training since 1972 as the 37th Flying Training Squadron.