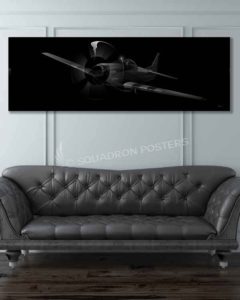 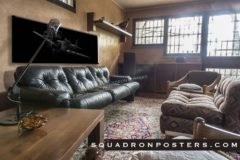 (Also check out the Frontal version.)

The North American Aviation P-51 Mustang is an American long-range, single-seat fighter and fighter-bomber used during World War II and the Korean War, among other conflicts. The Mustang was designed in 1940 by North American Aviation (NAA) in response to a requirement of the British Purchasing Commission. From late 1943, P-51Bs and Cs (supplemented by P-51Ds from mid-1944) were used by the USAAF’s Eighth Air Force to escort bombers in raids over Germany, while the RAF’s Second Tactical Air Force and the USAAF’s Ninth Air Force used the Merlin-powered Mustangs as fighter-bombers, roles in which the Mustang helped ensure Allied air superiority in 1944. The P-51 was also used by Allied air forces in the North African, Mediterranean, Italian and Pacific theaters. During World War II, Mustang pilots claimed to have destroyed 4,950 enemy aircraft.

The P-51 Mustang was famously flown by The Tuskegee Airmen, a group of African-American military pilots (fighter and bomber) who fought in World War II. The name also applies to the navigators, bombardiers, mechanics, instructors, crew chiefs, nurses, cooks and other support personnel for the pilots.