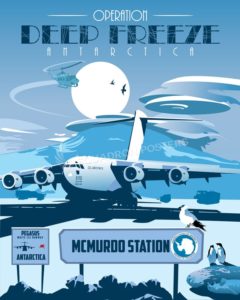 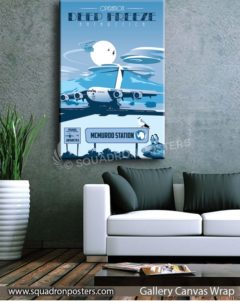 This poster is dedicated to the men and women who support Operation DEEP FREEZE at McMurdo Station Antarctica.  The scene depicts the elements that make up the McMurdo experience and the support provided to the Scientist on the base, with the Antarctic Fire Department rigs as well as the Penguins and Seals that drive the science mission that the C-17’s support.

The U.S. civilian and scientific operations on the Antarctic continent are overseen by the U.S. Antarctic Program as well as the National Science Foundation. Military support missions are conducted during the Antarctic summer by the 304th Expeditionary Airlift Squadron’s C-17 Globemaster III and the 139th Expeditionary Airlift Squadron’s LC-130 Hercules (New York Air National Guard). They are augmented by the U.S. Coast Guard icebreakers, the Air Force Materiel Command, and the Military Sealift Command.