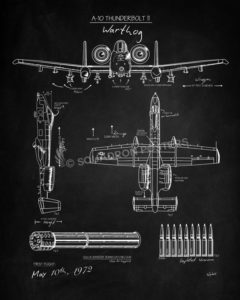 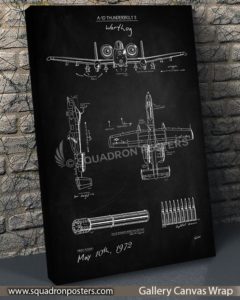 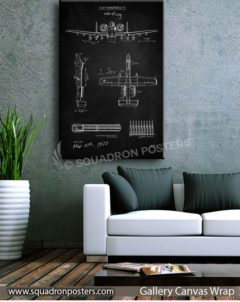 This vintage style military aviation travel poster “A-10 Blackboard Art” is dedicated to all the hard working men and women who fly, maintain and support the A-10 Warthog.

The General Electric GAU-8/A Avenger is a 30 mm hydraulically driven seven-barrel Gatling-type cannon that is typically mounted to the United States Air Force’s Fairchild Republic A-10 Thunderbolt II. Designed specifically for the anti-tank role, the Avenger delivers very powerful rounds at a high rate of fire. The GAU-8/A is also used in the Goalkeeper CIWS ship weapon system, which provides defense against short-range threats.

The Fairchild Republic A-10 Thunderbolt II is an American twin-engine, straight-wing jet aircraft developed by Fairchild-Republic in the early 1970s. It is the only United States Air Force production aircraft designed solely for close air support, including attacking tanks, armored vehicles, and other ground targets with limited air defenses. The A-10 was designed around the 30 mm GAU-8 Avenger rotary cannon that is its primary armament and the heaviest-ever automatic cannon mounted on an aircraft. The A-10’s airframe was designed for durability, with measures such as 1,200 pounds (540 kg) of titanium armor to protect the cockpit and aircraft systems, enabling it to absorb a significant amount of damage and continue flying.