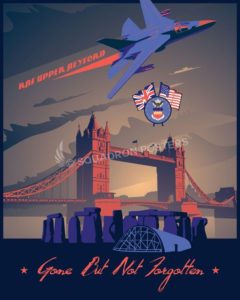 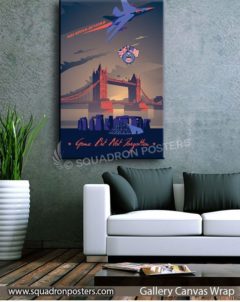 RAF Upper Heyford was a British military (Royal Air Force) base where many American Airman came to serve and create lasting memories of the vibrant communities it once was a part of, in Oxfordshire England. Since it closed in 1994, many service members still talk about the lasting friendships and fond memories made at this base.

RAF Upper Heyford was a Royal Air Force station located 5 miles (8 km) north-west of Bicester near the village of Upper Heyford, Oxfordshire, England. Established as an RFC aerodrome in 1915, the site eventually became an RAF bomber station in the 1920’s and 30’s, with the veritable Handley-Page Hampden Bomber equipping the 16th Operational Training Unit (OTU) in 1940. Not long after WWII, the USAF leased the air base from the Ministry Of Defense as part of the North Atlantic Treaty Organization (NATO) alliance. In 1952, the USAF’s Startegic Air Command (SAC) B-47 bomber aircraft arrived and stayed until 1965. The 66th Tactical Reconnaisance Wing (TRW) took up residence with the RF-101C “Voodoo” until 1969. By the mid-1970’s, the F-100’s of the 20th Tactical Fighter Wing (TFW) arrived and were replaced soon after by the F-111E, “Aardvark”. The US drawdown brought a close to US occupancy and operations at the air base in 1994, at which time the site was returned to the Ministry Of Defense.

The F-111 Aardvark was a supersonic, medium-range interdictor and tactical strike aircraft that also filled the roles of strategic bomber, reconnaissance, and electronic warfare in its various versions.