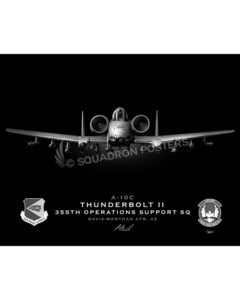 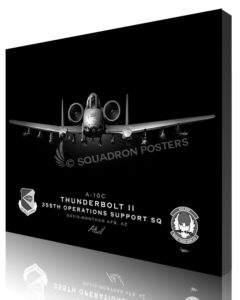 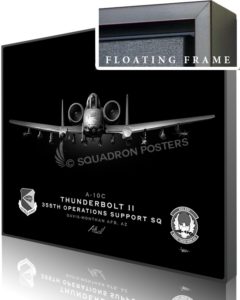 The 355th Operations Support Squadron (355th OSS) supports the 355th Fighter Wing combat missions tasked by the President, the Secretary of Defense, and the Chief of Joint Chief of Staff. The squadron also directs operational support functions including airfield, air traffic control and weather services, weapons and tactics, plans and exercises, intelligence and aircrew flight equipment for an operations group with three A/OA-10 squadrons. The 355th OSS is based out of Davis-Monthan Air Force Base, Arizona and provides aviation support for nine other flying units on base and develops flying schedules for over 14,000 sorties per year. Their Motto: “Guide Those Who Fly” and their Nickname: “Firebirds”. The Fairchild Republic A-10 Thunderbolt II (also know as the “Warthog”) is an American twin-engine, straight wing jet aircraft developed by Fairchild-Republic in the early 1970s. It entered service in 1976, and is the only United States Air Forceproduction aircraft designed solely for close air support, including attacking tanks, armored vehicles, and other ground targets.