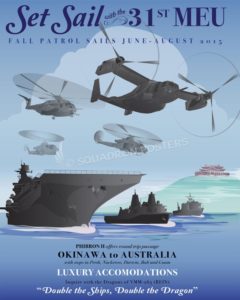 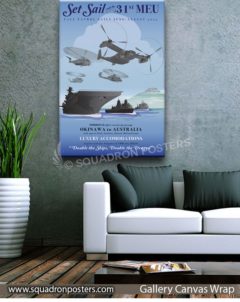 VMM-265 is one of two MV-22 Osprey squadrons in Okinawa, Japan. Every other year, VMM-265 becomes reinforced with AH-1W, UH-1Y, and CH-53E aircraft, then embark on the 31st Marine Expeditionary Unit ships for their tour of the Pacific. The squadron has a very storied history dating back to Vietnam. Their motto is ”It’s an Attitude”. They often say “Once a Dragon, Always a Dragon”  because they have so many pilots attached to VMM-265 for 6 months. The mission of VMM-265 is to provide Assault Support transport of combat troops, supplies and equipment during expeditionary, joint or combined operations. Also to be prepared for short-notice, worldwide deployment in support of Marine Air-Ground Task Force operations.

The 31st Marine Expeditionary Unit (31st MEU) is one of seven Marine Expeditionary Units in existence in the United States Marine Corps. The Marine Expeditionary Unit is a Marine Air Ground Task Force with a strength of about 2,200 personnel. The MEU consists of a company-sized command element, a battalion landing team (BLT), (an infantry battalion reinforced with artillery, amphibious vehicle and other attachments), a medium tiltrotor squadron (reinforced, which includes detachments of VTOL airplanes and heavy, light, and attack helicopters), and a combat logistics battalion. The 31st MEU is based at Camp Hansen, Marine Corps Base Camp Smedley D. Butler, Okinawa, Japan. This is the only permanently forward-deployed MEU, and is America’s expeditionary force-in-readiness in the Asia-Pacific region.