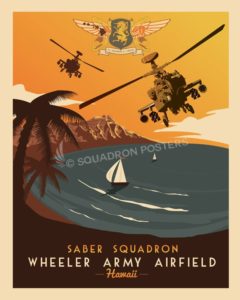 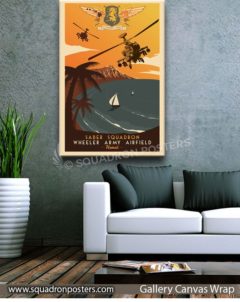 The 6th Cavalry (“Fighting Sixth'”) is a historic regiment of the United States Army that began as a regiment of cavalry in the American Civil War. It currently is organized into Aviation Squadrons that are assigned to several different Combat Aviation Brigades. The 2nd Squadron is the Air Cavalry Reconnaissance Squadron of the 25th Infantry Division Combat Aviation Brigade, stationed at Wheeler Army Airfield, Hawaii.

Activated on 12 August 1963, the Diamondhead motto is “Lele Makou No Na Puali” means: “We Fly For The Troops.”  The 2nd Battalion, 25th Aviation Regiment (Diamond Head) activated as an element of the 25th Infantry Division on 12 August 1963 at Schofield Barracks, Hawaii. Throughout its long and rich history, the unit served with distinction during several combat campaigns and operations other than war including Vietnam in 1969, Somalia, Africa in 1993, and Haiti in 1994. Task Force Diamond Head served in Afghanistan as Joint Task Force Wings at Kandahar Air Field from April 2004 to April 2005. Task Force deployed to Pakistan in support of Earthquake Relief Operations from October to December 2005. In July 2006, Task Force Diamond Head organized and deployed in support of Operation Iraqi Freedom 06-08.

Wheeler Army Airfield, also known as Wheeler Field and formerly as Wheeler Air Force Base, is a United States Army post located in the City & County of Honolulu and in the Wahiawa District of the Island of O’ahu, Hawaii. It is a National Historic Landmark for its role in the 7 December 1941 Japanese attack on Pearl Harbor.