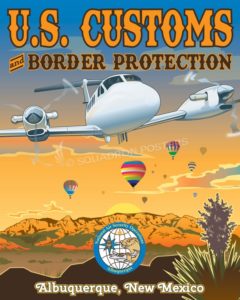 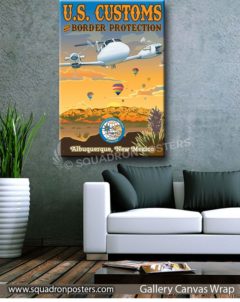 The NASOC-A (National Air Security Operations Center Albuquerque) provides tactical, operational, and strategic intelligence to DHS (Dept Homeland Security), CBP (Customs/Border Patrol), and other federal law enforcement agencies. It utilizes the King Air 200. They operate all over the country wherever required, but are based out of Kirtland AFB, NM (home of the balloon fiesta).

The Beechcraft Super King Air family is part of a line of twin-turboprop aircraft produced by Beechcraft. The Model 200 and Model 300 series were originally marketed as the “Super King Air” family, but the “Super” was dropped in 1996. They form the King Air line together with the King Air Model 90 and 100 series.

Kirtland Air Force Base is a United States Air Force base located in the southeast quadrant of the Albuquerque, New Mexico urban area, adjacent to the Albuquerque International Sunport. The base was named for the early Army aviator Col. Roy C. Kirtland. The military and the international airport share the same runways, making ABQ a joint civil-military airport.