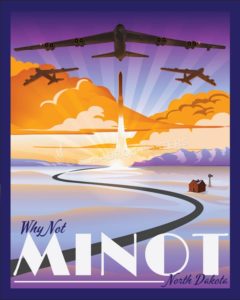 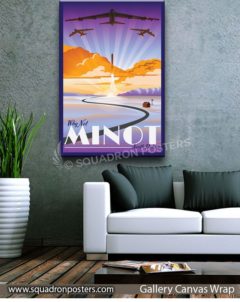 Minot AFB is the home of two major wings: the 5th Bomb Wing (5 BW) and 91st Missile Wing (91 MW), both of the Air Force Global Strike Command. The 5th Bomb Wing (5 BW) is a United States Air Force unit assigned to Air Force Global Strike Command’s Eighth Air Force. It is stationed at Minot Air Force Base, North Dakota. The wing is also the host unit at Minot. The 5 BW is one of only two Beoing B-52H Stratofortress wings in the United States Air Force, the other being the 2d Bomb Wing at Barksdale Air Force Base, Louisiana. The 91st Missile Wing (91 MW) of the Global Strike Command (AFGSC) is responsible for maintaining the Minuteman III nuclear missiles, located in three main fields to the north, west, and south of the base. Previously known as the 91st Space Wing, it was renamed as a missile wing in June 2008. It is one of the Air Force’s three operational intercontinental ballistic missile units. As of 2016, the LGM-30G Minuteman III version is the only land-based ICBM in service in the United States.