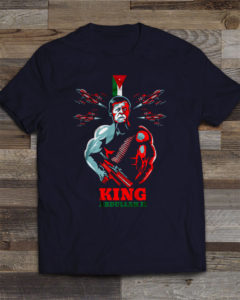 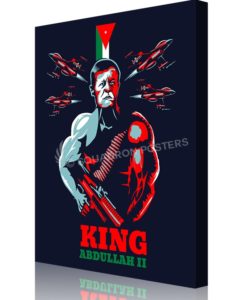 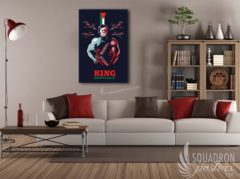 Jordan’s King Abdullah II ibn al-Hussein was in Washington when news broke of pilot Muadh al-Kasasbeh’s demise at the hands of ISIS extremists. (King Abdullah, also a trained pilot) Meeting with the House Armed Services Committee shortly before leaving for Amman, reportedly quoted Clint Eastwood’s film “Unforgiven” and said that Jordan would pursue the jihadis “until it ran out of fuel and bullets.” – After his fighters retaliated, he ordered his returning jets to fly over the home of his fallen aviator’s family. The actions and response of Jordanian King Abdullah II ibn al-Hussein is no less than epic and are rarely found or repeated in leaders throughout history.

This retro movie style T-shirt is in recognition of this truly historic act of leadership and is intended to honor King Abdullah, his war fighters and the people of Jordan!

Squadron Posters “Yoked Series” honors those who demonstrate “Strength through Leadership”. The term “Yoked” referring to a strong or large trap muscle between the shoulder and neck. Word originates from the “yoke” that is placed around the neck of oxen and has now developed into a broad term for hugeness and strength.

Be the first to review “King Abdullah T-shirt” Cancel reply