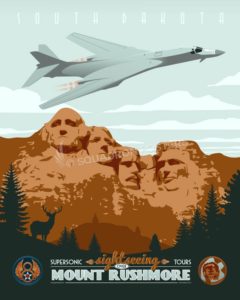 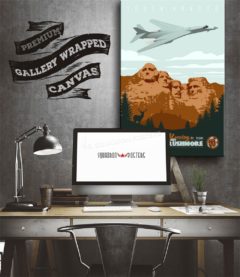 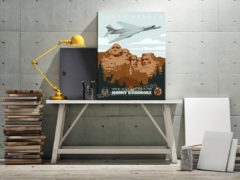 This poster is for all the hard working men and women at Ellsworth AFB, South Dakota. The 37th Bomb Squadron fly’s the B-1 Lancer. The B-1 is commonly referred to as the B-ONE or ‘Bone’.  The USAF B-1 bomber holds 61 FAI world records for speed, payload, distance, and time-to-climb in different aircraft weight classes. ‘Supersonic Sightseeing Tours over Mount Rushmore‘.

The 37th Bomb Squadron is one of the oldest in the United States Air Force, its origins dating to 13 June 1917, being organized at Kelly Field, Texas. The squadron deployed to England as part of the American Expeditionary Force during World War I. Established as a World War I Aero Squadron in Texas; deployed to France in September 1917. The squadron participated in aircraft construction from 1917–1918 and conducted flying training in 1918. Returned to the United States and inactivated in 1919. (The WWI 37th Aero Squadron emblem is depicted in the bottom right of this poster art)

The squadron saw combat during World War II, and later became part of the Strategic Air Command (SAC) during the Cold War.