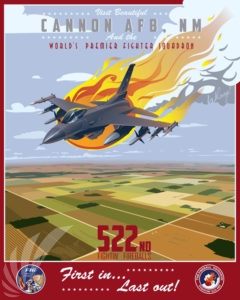 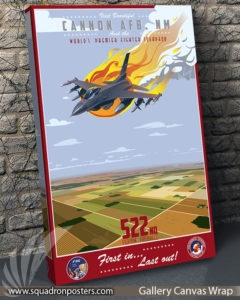 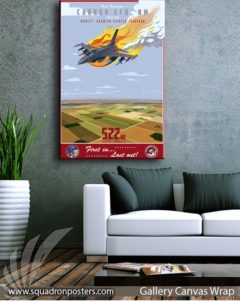 The men and women of the 522nd Fighter Squadron Fightin’ Fireballs operated and supported the F-16, and were part of the 27th Fighter Wing at Cannon Air Force Base, NM.  The 522nd’s primary mission was to maintain the continuous ability to rapidly deploy and support unified commanders worldwide with day or night F-16 combat operations. Additionally, the unit mission included the ability to decisively employ the F-16 throughout the entire spectrum of offensive and defensive missions including suppression of enemy air defenses, interdiction, close air support, strategic attack, and counter air through the employment of conventional and precision guided weapons.

The Fireballs first flew the F-16 on Sept. 18, 1995, and officially became the first operational F-16 squadron on Cannon AFB in July 1996.  In 2003, the 522nd upgraded from the older Block 30 model to the newer Block 50 model F-16, and flew that version until the unit was inactivated in 2008. The squadron emblem features a blue background and cloud formation representing the theater where the mission is performed. The fireball, a dynamic force with striking power, represents crushing attacks directed on the enemy from the skies and wholly expresses the mission of the unit.