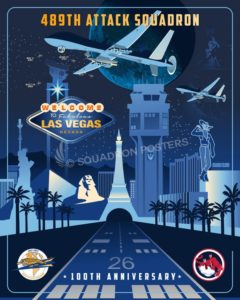 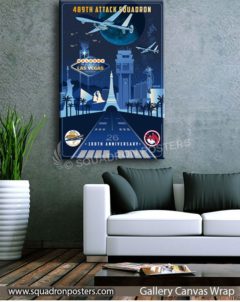 The 489th Attack Squadron (489 ATKS) is part of the 432 Wing at Creech AFB, Nevada. It operates the MQ-9A Reaper and the MQ-1B Predator supporting United States Combatant Commanders by enabling continuous armed intelligence, surveillance & reconnaissance in addition to rapid global strike capabilities. The 489th is the Air Force’s first and only dedicated Launch & Recovery squadron! It was previously active at Beale Air Force Base, California as the 489th Reconnaissance Squadron from 2011 to 2015.

The squadron was first activated as the 77th Aero Squadron in 1917. Redesignated as the 489th Aero Squadron, it served as a support unit in France during World War I before returning to the US and being demobilized in 1919. This poster artwork commemorates the 100 year anniversary of the founding of the 489th Attack Squadron.

The MQ-9 Reaper is an unmanned aerial vehicle (UAV) capable of remotely controlled or autonomous flight operations, developed by General Atomics Aeronautical Systems primarily for the United States Air Force. The MQ-9 and other UAVs are referred to as Remotely Piloted Vehicles/Aircraft (RPV/RPA) by the USAF to indicate their human ground controllers. The MQ-9 is the first “hunter-killer” UAV designed for long-endurance, high-altitude surveillance.