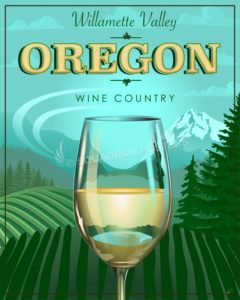 The Willamette Valley is a 150-mile long valley in the U.S. state of Oregon in the U.S. Pacific Northwest.
The valley forms the cultural and political heart of Oregon and is home to 70% of its population including Portland, its largest city and Salem, the state capital. The Willamette River flows the entire length of the valley, depositing highly fertile alluvial soils across its broad, flat plain. The valley is surrounded by mountain ranges on three sides with the Oregon Coast Range to the west. A massively productive agricultural area, the valley was widely publicized from the 1820s as a ‘promised land of flowing milk and honey’. In recent decades, the valley has also become a major wine producer, with some of the best Pinot noir in the world, as well as a high-quality Pinot gris.