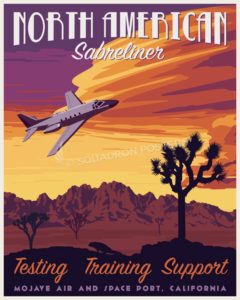 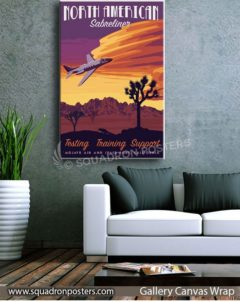 Flight Research, Inc (FRI) has been an international provider of professional civilian and military flight testing services for over 30 years.  They provide contract flight testing, flight test support and facilities, aircraft leasing and maintenance.  FRI operates a fleet of 40+ aircraft of 22 types from light aircraft to military jets to helicopters.  FRI also provides advanced pilot training and is the national leader in Upset Recognition and Recovery Training (URRT) for commercial pilots.

Contact us at http://www.flightresearch.com/ and “come fly with us”!

The North American Sabreliner (Shown in this artwork), later sold as the Rockwell Sabreliner, is a mid-sized business jet developed by North American Aviation. It was offered to the U.S. Air Force in response to their Utility Trainer Experimental (UTX) program. It was named “Sabreliner” due to the similarity of the wing and tail to North American’s F-86 Sabre jet fighter. Military variants, designated T-39 Sabreliner, were used by the U.S Air Force, U.S. Naval/Marine forces after the Air Force placed an initial order in 1959. The Sabreliner was also developed into a commercial variant.

Featured Vector Artist
Minnesota
Steve worked for newspapers creating graphics and illustrations for 14 years before embarking on his own as a freelance illustrator. Now he creates mostly vintage-inspired artwork with a modern twist. He currently lives on one of the 10,000 lakes in Minnesota with his family.