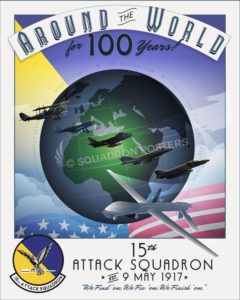 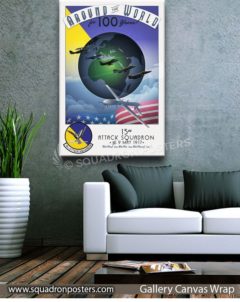 The 15th Attack Squadron (15 ATKS) is part of the 432 Wing at Creech AFB, Nevada. They currently operate the MQ-1B Predator and provide US combatant commanders persistent attack and reconnaissance across the globe. This poster artwork commemorates the 100 year anniversary of the founding of the 15th Attack Squadron on 9 May 2017.

The 15th Reconnaissance Squadron’s origins go back to 9 May 1917, (WWI) when it was stood up as the 2d Aviation School Squadron at Hazelhurst Field, Long Island, New York. The original mission of the squadron was part of the defense force for the New York City area, flying coastal patrols and as a flying training unit.

During the early stages of World War II, the 15th supported the Field Artillery School in Oklahoma. On March 26, 1944, the unit deployed to England and began combat operations over France. Its first combat mission was photographic reconnaissance on an F-6. On June 6, 1944, the 15th received credit for the first aerial victory by a tactical reconnaissance pilot as well as the first victory of D-Day. The unit continued armed reconnaissance operations in the European theater until July 1945.

The squadron was recently redesignated the 15th ATTACK Squadron on 15 May 2016 from it’s prior designation, the 15th Reconnaissance Squadron.