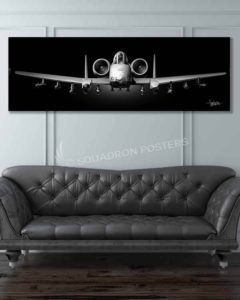 The Fairchild Republic A-10 Thunderbolt II (also know as the “Warthog”) is an American twin-engine, straight wing jet aircraft developed by Fairchild-Republic in the early 1970s. It entered service in 1976, and is the only United States Air Force production aircraft designed solely for close air support, including attacking tanks, armored vehicles, and other ground targets.

The only Air Force Reserve Command wing located in the State of Missouri, the 442nd Fighter Wing is responsible for the operation, maintenance and support of a squadron of 27 A-10 Thunderbolt II aircraft, more commonly known as the “Warthog” or simply as “The Hawg”.  The men and women of the 442nd and all of it’s geographically separated units are proud to serve in the Air Force’s premier A-10 organization along side our Total Force Partner, the 509th Bomb Wing. Based at Whiteman Air Force Base, Mo., the 442nd traces its lineage back to World War II, when the 442nd Troop Carrier Group, based at what was then Sedalia Army Airfield (now Whiteman AFB), air-dropped and air-landed troops and supplies during D-Day and Operation Market Garden.  Today’s 442nd Citizen Airmen carry on our proud tradition of supporting the U.S. Army and allied ground forces using the Air Force’s only aircraft ever designed for close-air-support.